The series of posts that continues here constitutes a sequel to a previous entry I wrote about the LaVeyan principle of “Indulgence, not abstinence.”  Similarly to that entry, it too is about the further implications of that principle - specifically, the idea that the free pursuit of pleasure, defined in whatever manner suits the individual, is a fundamental good of life that therefore ought to deserve more respect than it sometimes gets.

The central argument of this series of posts is that inasmuch as indulgence is of the significance that it is, people ought not to police pleasure unless engaging in it is causing a clear-and-present identifiable harm.  Among the things this specifically means are:

Observing these rules re: not judging other peoples’ pleasure makes life a more pleasurable experience for everyone.  Doing the opposite creates situations in which people are garbage toward one another for no good reason, all-too-often toward the end (whether intended or not) of promoting herd conformity.  The overarching sentiment can be summed up briefly as "just let people like what they fucking like."

This series is already-written-and-complete, but is being split into three entries spaced over several months, because i) it’s long and ii) then I don’t have to put my blog on hiatus due to being busy.  Editing it after the fact, I'm realizing that some of it is toward the extra-bitchy end of stuff that I post on this blog, but that's how it goes sometimes: I have opinions, and you can enjoy them... or not. ;)

Two examples of what I mean by policing pleasure based on awkwardness are as follows:

1) People who pride themselves on their embrace of sexual diversity, yet turn around and make fun of furries.

Some of the people big on cancel culture right now are, I reckon, just a few years of progressive-time away from themselves being canceled over how brutally furphobic they are.  Has it occurred to any of these people that your disdain of someone’s sexuality because “OMG cringy awkward weird” is probably an awful lot like how uptight conservatives feel about gay, bi and/or trans people?

Yes, really.  Yes, seriously.  People who think that saying stuff like this is automatically indicative of parody are part of the very problem I am pointing at.  Do you take those words about sexual diversity coming out of your mouth seriously, or do you not?

I admit I have a slight personal investment in this issue, inasmuch as had the concept existed in my sphere of awareness when I was in high school, I almost certainly would have had a furry phase - or more precisely, a scaley phase, given my degree of dragon fandom at the time.  Regardless, the point in my mind remains unchanged: if your philosophy of sexuality is “if it’s not hurting anyone, it’s fine,” you have no business singling out certain fetishes for mockery, ever.  The point I am making about furries thus applies no less to adult diapers and every other manner of fetish that people may find uncomfortable to contemplate.

A couple related irritations include:

Bottom line of this topic: That part of your brain that chirps up about “but it’s so, so, so lame, how can I not say something?” is the same part of the brain that makes people-less-progressive-than-you laugh at gay peoples’ non-traditional gender mannerisms and at trans people who don’t pass.  So if you are unwilling or unable to shut that part of your brain down completely, don’t go around talking like you are a paragon of moral perfection when it comes to embracing “sexual diversity.”

2) People “too cool for subculture” who make fun of those who express open emotions of any kind pertaining to music fandom.

Back when I was 19, there was this distinct type of person in the scene who would have gothy hair and fashion, like all the music, yet always make a point of wearing at least one color with their black and always make a big deal about how they did not identify as goth.  (Optional but paradigmatic trope extension: must, at least once a year, come to the goth night wearing either all-white or pastels, and point out the irony to absolutely every last person present.)  I get the impression this was more-or-less an earlier generation of what is now known as “hipsters,” but at the time I called this group of people “the anti-subculture subculture.”

People like this were forever making fun of, talking behind the back of, and attempting to interfere in the friendships and relationships of people who did openly identify as goth and who committed the oh-so-horrific faux pas of actually getting excited about the music openly, such as myself.  Oh, you actually are goth?  You are oh so very lame.  Oh, you are actually excited about this band?  We are embarrassed to be seen anywhere in the proximity of your conversation.  Oh, you actually have crushes on rock stars?  Clearly you deserve to have no friends and we must convince all potential partners to avoid you.

This is, in retrospect, hilarious given that certain music-fandom tendencies of mine have become way, way crazier in the years since then.  Sorry too-cool hipsters, but there are some of us to whom music just is important.  C'est la vie.

A relevant past incident that has long bothered me a lot involved a certain person who was a huge fan of a certain band making a publicly-witnessed remark about having touched some item of musical equipment that his idol was about to use.  Even though this person and I had our issues over the years, it nonetheless always enraged me to hear people make fun of him for the oh-so-terrible transgression of showing actual human emotion about something he was super stoked about.  Even during the period of time when he and I were “enemies,” I several times bit someone else’s head off because they were being being a jerk about this.

What I find super-bullshit about this kind of thing is that I’m pretty sure the vast majority of people in the dark scene are passionate about music at least some of the time.  Why then should this dynamic exist like this is something shameful that has to be hidden away?  Or if you really aren’t subject to getting excited about it all that much, why is it a problem if other people are?  Seems like an incredibly dumb way of running a subculture: we are here in the first place because we like things, but heaven forbid that we openly admit liking things!

Cases like those described in this post are, in a sense, the opposite of cases described in the previous pleasure-police post.  In the former instance, enthusiasm is policed for being not genuine enough; in the latter instance, enthusiasm is policed for being too openly genuine, because something about too-genuine expressions of indulgence sets off people’s “awkward cringe” impulse.

Analysis of that impulse, however, suggests that really these two forms of policing spring from the same source in herd conformity.  People cringe, typically, because they would be embarrassed to be saying/doing what the awkward-person is doing.  And what cause could there be for such embarrassment besides “oh noes, what would other people think of me for talking/acting that way?”

Perhaps this account of how the awkward cringe works is flawed, in which case I myself may be guilty of insufficient appreciation for peoples’ natural impulses in this regard.  But if it’s correct, it seems to me that the Satanic conclusion is that people ought to try to conquer this impulse so that both themselves and everyone can live a freer life of indulgence.

You feel "awkward" when confronted with someone’s “deviant” form of expression? 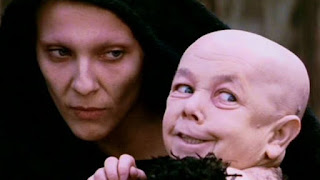 Satan doesn’t care about "awkward."  And really, neither should you.

This is a personal blog. Opinions expressed are solely my own and do not reflect views held by any of my employers or anyone else with whom I may associate.

thiyavat
Creepy troll sorceress with a PhD in the Dark Arts